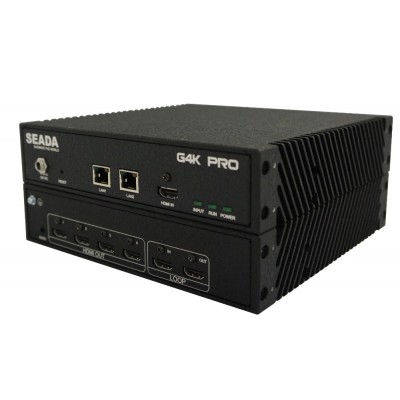 The SEADA G4K is a video processor for building creative image walls, easily and without limits thanks to the chain of several G4K units for giant image walls! The G4K accepts a 4K input and allows it to be divided on 4 displays (LED, DLP, LCD, Video projectors) up to a maximum resolution of 1920x1200 @ 60 Hz. Each output supports a rotation of 90, 180 and 270 degrees and is capable of cutting the input video arbitrarily and allows you to create original and creative image walls. The resolutions and frequencies of each cut-out part can be upshifted and downshifted independently of each output. The G4K is easily configured by PC via IP thanks to its intuitive graphical interface software. Entirely fanless, the G4K operates autonomously, without a PC and can be controlled via management systems such as AMX, Crestron, Extron. G4K is a professional, innovative and very affordable solution for the construction of intelligent and creative image walls for a multitude of applications: reception hall, events, museums, education, control room,.....